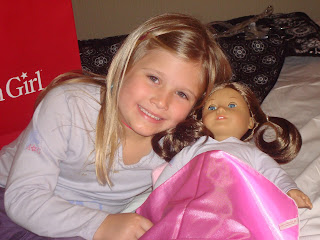 New bed for her doll! 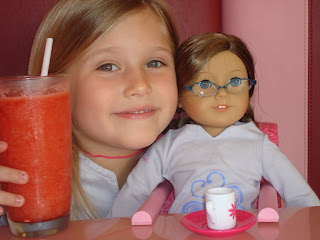 Smoothie with her American Girl Doll! 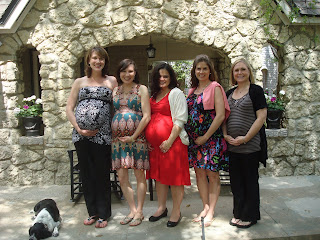 Miss Kylie went with me to visit my sweet friends in Dallas for a baby shower and then we had some fun Mommy-Daughter time together!

Jackie is having her first baby, little Olivia. The shower was absolutely adorable. Decorated all in Red, Black, and White. Cutest theme ever. I didn't get to see my friends for too long, but I always treasure every minute I have with them. There were five of us pregnant at the shower! That's out of 9 girls! Very funny.

After the shower, Kylie and I headed to the Westin at the Galleria. Shortly after we got there Kylie was ready to swim, of course. It was maybe 80 degrees, so too cold for mommy! She had a great time and met some friends at the pool. We headed back to the room for a shower and then it was off to ice skate! I couldn't ice skate with her, so I was very apprehensive about her going, but she assured me it was just fine. Of course she did fabulous! She loves ice skating and has gotten pretty good at it for only her second time! After ice skating I told her we could go anywhere she wanted to eat and she picked none other than McDonald's (seriously?). So, we ate at the Food Court - yum. Last, it was a stop at the American Girl store. She picked out a friend for the doll she has and a few other things, such as pj's since she would absolutely need some of those for the night! It was about time to call it a day so we went back to the room. Once we got back, there were little cupcakes, a glass of milk and a doll bed for her American Girl Doll! She was super excited.

The next day we had brunch at the American Girl Bistro, which is actually a pretty great place to eat! They have a little box filled with question cards that you can ask each other so we had fun doing those while we waited. She came up with some pretty funny answers. After brunch, we hit the mall for a few minutes, bought some goodies at Claire's Boutique and hit the road! I just love these fun times with Kylie and I hope she'll remmeber the special times she has with Mom. I know I will! 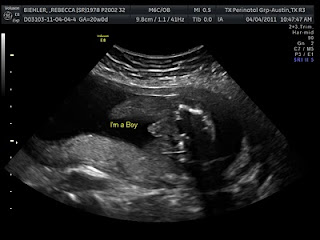 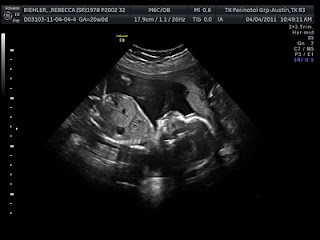 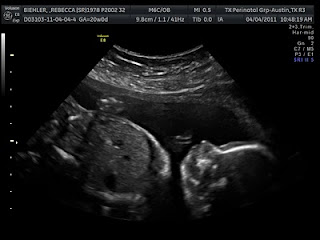 Oh, he's already so cute! I can tell! So amazing that this is going on inside my body. And, it's just as amazing as it was the first time I did it! The doctor said everything looked good and the baby seemed to be right on track. I have to say, I am so glad to finally know. I was thinking it was a girl for some reason, but it seems I was the only one. Kylie really wanted it to be a girl, but I think she'll soon realize that she is glad it's a boy. I'm so glad Jackson will now have a little running buddy and I don't even have to redo the nursery! I still love it, so I am leaving it as-is. Check that off the list. Now, if we can just figure out if we are going to get to make some changes to our house. Next thing we have to do is meet with a contractor. If only Papa was still alive, we'd be all set!
So, now I am officially halfway done. Hard to believe. Still feeling great, but I run out of steam around 5:30 or 6:00 and I am exhausted! More to come later!!!