Will I meditate on His word or my worries?

A co-worker and friend sent this to me today and it was just what I've been needing to hear. I keep hearing God telling me to get back into His word and yet I haven't been doing it like I should. So, I'll take this as a clear sign that once again, He is telling me what I need to do.

2011 was a good year, but one of change and hardship. We found out we were pregnant with Carter James in January of 2011. Of course I was joyful that God had blessed me with another precious child, but I have to admit, I was completely overwhelmed by the idea of bringing another child into the world at that time. Things had just gotten a bit easier managing the two children! Now, this was going to be a whole new ball game. Wow. I really had mixed feelings. I will never refer to Carter as an accident. He is no accident. He is God's perfect plan. Now that he's here, I am so grateful that God knows what's best for my life no matter how much I resist.

So, we had some remodeling done to our house which ended well but the process was very unsettling. We were told it would take maybe 5-6 weeks and it ended up taking months. Our house was a disaster, our animals were freaked out, and here I am pregnant in the hot summer. That was neat. The contractor rarely showed up, they had to redo things plenty of times, and it just kept going on and on. It as mentaly and physically exhausting. Luckily, about a week shy of Carter's arrival, we were finished. Now, each kid has a bedroom, my office has been moved to the kitchen and the kids have a fantastic playroom. Thank you Jesus for providing the means for us to do this. Truly, we couldn't have made it happen without blessings from above.

Adam went to a knew mortgage company which we were very excited about. He was promised so many wonderful things, it seemed like the perfect situation. Well, it started out that way. After many broken promises, paychecks not coming as they were supposed to, and a system that seemed to be very dysfunctional, Adam decided to look elsewhere. It was a major disappointment, but once again, God provides! Now, he has been at a new company doing training and computer programming support and is really liking it. He enjoys the people he works with and enjoys being someone that people can go to for help. We are super excited about the opportunities for growth. Yay!!!!

Kylie started first grade at Regents only a few days after Carter was born. This was super hard for me. I was busy taking care of the new baby so Adam pretty much took over Kylie and Jackson's care for a while. Dagger to my heart. I hated not being there for them and I knew they missed me. I knew it wouldn't always be like that, but I am very hands-on with them and I just knew I was scarring them for life! (silly, but that's how I felt). Kylie's teacher reassured me a few weeks after school started that she hadn't skipped a beat and was doing wonderfully in school. That did make me feel better, however, I still felt like I was missing out on so much. Ugh. Thankfully, things are a little easier now that Carter is older and I am able to do more and be there for her more. It's still a challenge with all three, but it is getting more manageable.

Jackson has had a great year. He is absolutely precious and I am so thankful for him and his sweet, funny spirit. He's a mess, don't get me wrong, he knows how to push the limits and push our buttons! But, we can already tell he is going to be a funny guy and other kids love him. He has a very good heart and is very attentive to detail (just like mom). He loves his trucks, trailers, trains and anything with wheels and is very good about playing with his toys. I am excited to see Carter join in the fun! He had a great Christmas this year as he really is starting to "get" the idea of Christmas. I love this age!

Carter, our sweet, sensitive one... Emphasis on sensitive here. Oh man, I thought Kylie was a difficult baby. He makes her look like a piece of cake. This little guy just couldn't be happy. If he wasn't eating or sleeping, he was crying (seriously). It was exhausting! After many doctors appointments and tests, I've come to the conclusion he has a very sensitive tummy and he's overall just a sensitive little guy. He really wants to be held most of the time. He needs that human touch. He does not want to be put in a bouncy or seat and just left there! In a way, I really think it's his own little spirit saying "I know I'm #3 and you want to go about your business, but I need attention and need to feel like my needs are met." Or so I keep telling myself that. Now he's on Zegerid for his reflux and that seems to help with his spitting up and discomfort. We've gotten him more on a schedule and have figured out the best ways to get him what he needs. He's five months now and certainly easier than before, but we're still working on it! I just know he's going to be a sweet boy, I can tell. I love my snuggles with him and watching him grow so quickly makes me want to wish for time to stand still so I can cherish this time. We've started on rice cereal and applesauce and he loves to eat! He is already very interested in real food and grabs for it any chance he gets. Eating with him in my laugh is hard to do because he keeps pulling my plate and grabbing for my food! I don't think we'll have any trouble feeding this guy. He's weighing in at about 19 lbs now and he is a chubber wubber!

As for me, well, I'm hanging in there! Loving my family is what keeps me together. With Adam's new work hours, it has definitely put more on my schedule, but I've got my amazing Grandma Mary to help me. I know it's hard on her too, but she loves being with the kids. It brings her so much joy. God has blessed us so abundantly in her and I couldn't be more grateful. She is leaving a legacy of selflessness and sacrifice and I know many years from now our kids' kids will be talking about her!

I can always tell when I've waited too long to post because my blog will go on forever! So, in closing, in 2012 my focus will be to "meditate on His word and not on my worries." In times when it seems like there is nowhere to turn, I know I can always turn to my Redeemer. He will provide...

Posted by Becky Biehler at 8:54 AM 0 comments 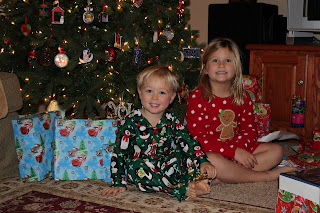 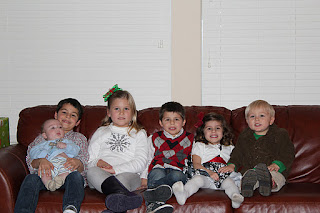 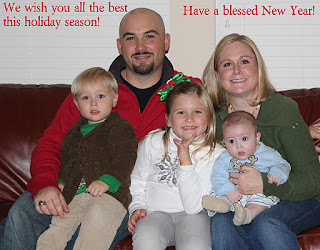