Or in this case... Valentine.
Valentine was Kylie's class pet for a short while until a classmate decided to keep her permanently. She is a 6 month old, white bunny.  The kids were oh-so-entertained by having her around.  She, on the other hand, was not so entertained.  Could it be because Jackson liked to pick her up and hold her in a head-lock or maybe it was that time we let her run around outside and then someone let Harley out and it was complete mayhem?  I have never heard a rabbit scream until now.  It actually sounded very similar to a squealing baby pig.  I felt bad, but it was kinda funny and no one got hurt.  I don't think Harley wanted to hurt the bunny at all, it was more of a game to her.  Chase the rabbit and pounce!  We even introduced Pudge (our cat) to the rabbit and he could care less.  He literally walked by it and didn't even pause for a sniff.  Typical.  He really only cares about eating and sleeping.

One of the things the kids found out Valentine likes to do is chew on pieces of paper, so they would hold out the paper and Valentine would take little nibbles from it.  Pretty cute.

We had Valentine for a long weekend, and I can say I think her and I were both happy when she was returned to the school.  It was fun while it lasted, but this mama needs no more breathing creatures in this household.  We're at maximum capacity!!! 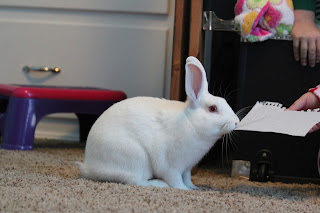 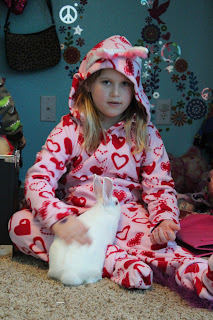 Always dressed for the occasion! My little bunny playing with Valentine. 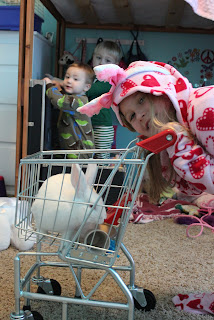 I can't imagine why she wouldn't like it here?
﻿