I think when most people look at Jackson and Carter, from first glance, they don't think they look alike.  But, it's amazing how pictures capture the similarties in our children.  I'm unable to get my photos of Kylie when she was this little right now (long story but boo on my back-up drive), but I dare to say she would look quite a bit like these two boys.  I have one of when she was a bit older, but you can still see the similarities.  See what you think!!!  Of course, they are all precious to this mama!  I think the one thing I adore most about all my children is how they smile with their eyes.  They have so much expression and joy in those beautiful eyes.  Kylie's are a light blue, with a hint of gold, Jackson's are so light they are almost grey, and Carter's eyes are big and beautiful brown!  Kylie's hair was dark when she was born, then quickly turned light blonde and continues to change from light to dark blonde through the year.  Jackson is my toe-headed one.  Definitely gets it from my side of the family full of blondies.  Carter, of course, is my brunette.  But, not so fast!  That boy's hair keeps getting lighter and lighter all the time.  It has streaks of gold in it.  We'll see what the summer sun does to it! 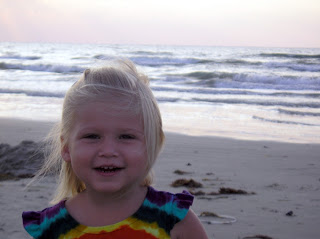 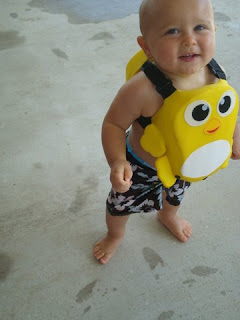 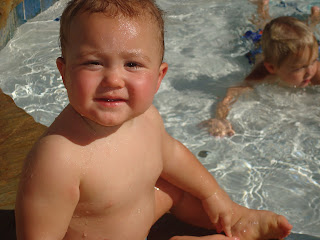 Posted by Becky Biehler at 9:54 AM 0 comments

We had a fun-filled, busy Spring Break!  I wanted to keep the kids busy having fun, so everyday we had a new adventure!  I LOVED spending time with the kiddos and being able to completely focus on them.

Day One - Chuck-E-Cheese
Home of the world's worst pizza, but the kids seem to like it.  The reason I love this place is because the games are only 1 token and they have games for even the young ones to play.  I took all three of them which was a little tricky trying to keep an eye on all of them.  Carter basically wanted to sit it in the Bob-the-Builder car the entire time or go to skee ball and throw the balls around (that was fun).  The kids won lots of tickets and had fun picking out their trinkets (worth probably about $1 total:)  We had a great time and I was so happy we decided to go.  Sorry, no pics on this one.  I was too busy keeping up with the kids!

Day Two - Zilker Park
One of the best places in ATX! The playground rocks and the kids love to ride the train.  Even better, the D'Amura cousins joined us!  We brought our lunch and had a great time!  Jackson loves the antique fire truck there and I did have to fuss at him a few times to let the other kids have a turn at the big wheel.  He loves everything firefighter and people giggle at him for wearing his fireman rain boots EVERYWHERE, EVERYDAY.  I think it's hilarious. The train ride is always nice and of course we got to see the usual guy playing the guitar along the way. Oh, and who can forget Zippy the creepy clown that makes balloon animals.  Tons of fun! 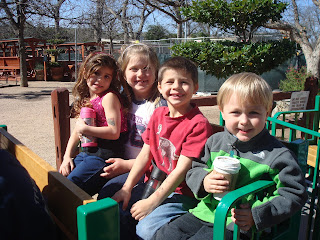 Day Three - Austin Zoo
I really like our zoo.  It's nothing all that special at all, but it's one you can go to and spend a couple of hours, then go home before everyone gets too tired.  The lion is by far my favorite, but I am partial to the bears as well (Sic 'Em).  Lions have to be one of the coolest creatures on the planet!  They are so beautiful and yet so intimidating.  The kids always enjoy getting to feed the goats and deer.  Carter liked to watch, but he did not want those silly goats all up in his business.  Those goats can be quite forceful!  After we made the rounds we sat down to a nice lunch (until we got taken over by bees).  Then, we enjoyed a cool sno cone to end our trip and each one got to pick out a small souvenir at the gift shop.  Of course, Kylie went straight to the stuffed animals, which she knows drives me crazy.  She only has about a million already.  Carter really dug all the cool little cars and Jackson, well, he was being his usual self walking around touching everything.  They were pooped when it was time to go home and so was I!!! 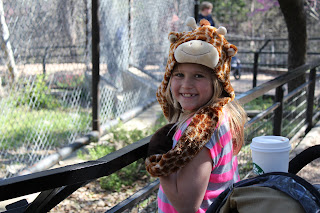 Perfect hat for the zoo! 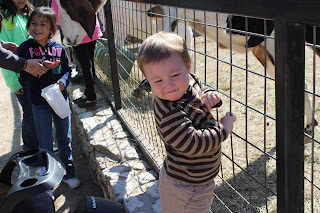 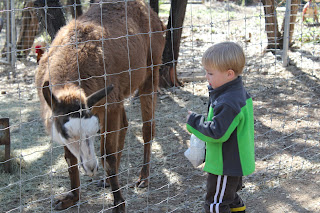 Day Four - Austin Rodeo... yeeee haw!!!
Not only is the rodeo in town for Spring Break (yay) but it was $10 off wristbands that week as well (double yay)!  Those rodeos are not cheap!  Grandma Debbie had the day off work and I was so glad she came with us.  I needed another grown-up.  We got there mid-morning and started off with a few fun rides.  I love it that Jackson is allowed to go on most of the rides this year.  I tried to go on one ride with Carter and he was not a fan at all.  He kept wanting to get out and shaking his head and saying no the whole time.  I felt bad, but it was also kinda funny.  Then, off to see the tractors!  This is what Jackson loves the most.  It's just a bunch of huge tractors and heavy machines set out for people to look at to buy.  Of course, mainly it turns into a place for kids to play.  We spent quite a bit of time watching the kids go from one machine to the next.  I wasn't sure we were going to ever leave that place!  Luckily, it was getting to be lunch time so we grabbed a bit of food to re-fuel.  Jackson didn't eat much, which is the usual, but of course he wanted ice cream.  Carter was getting really sleepy, so he was pretty chill in the stroller until he finally gave up and fell asleep.  To finish the day off Kylie and Jackson both played a balloon popping game to win a prize and we rode a few more rides.  Some rides she wanted to do and I said absolutely not.  If it goes too high, too fast, or turns upside down then forget it!  I don't know how well those things are put together.  I have to be honest that I don't have the up most confidence in the staff who run those traveling carnivals.  But, we did go on a few really fun rides and she loved it!  By about 3:00 they were all definitely ready to go, as they got grumpier by the minute.  It turned out to be a good day:) 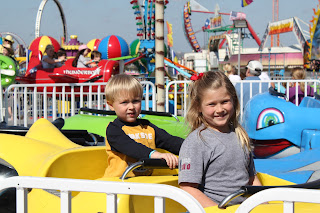 First ride of the day! 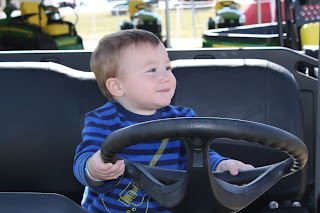 Where are we going Carter? 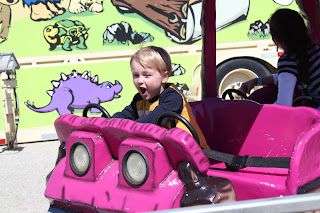 I think he likes it:) 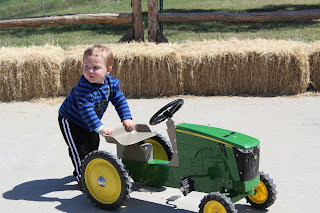 I can't figure out how to ride it, so I'll just push it.

Day Five - San Antonio Zoo
I asked Aunt D and Taylor to join us for a trip to the San Antonio Zoo. I knew I couldn't do that one alone!  Thank the Lord I asked them to join.  Wow.  Little did I know that every single person in San Antonio decided to go to the zoo that day.  It was crazy-packed!  Trying to figure out where to park and how to manage all three kids was a challenge for sure.  I think by day five the kids were just plain tuckered out, so next year we'll have to plan our big adventure at the beginning! We did get to see some really neat things.  It's quite a bit bigger than our zoo, so they have way more stuff to look at.  The tigers are so awesome and Kylie loves going to feed the Lori birds (I think that's what they are called?)  They have a great kids area with places they can play and water they can play in.  The kids were content to stay there and not even look at the animals!  I think we'll spend more time there next time.   The squirrel monkeys might have been my favorite.  It is so interesting to watch how they use their hands just like we do.  It's crazy.  And, they have so much personality!  They are fascinating.  I really like this zoo and can't wait to go back (maybe a time that's not so crowded). 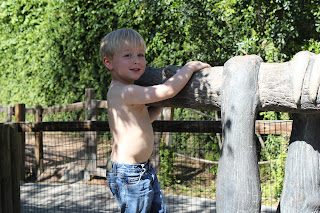 Playing in the water!!! 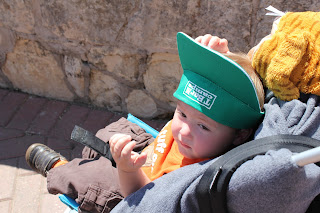 Homeboy Carter put his hat on by himself:) 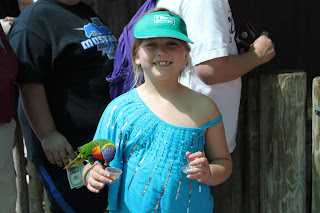 ﻿
She loves feeding the birds! 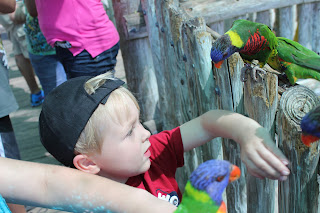 Jump on birdie!!!
We had a jam-packed week of fun and adventures!  I felt like we really used our time well and had accomplished lots of fun activities!  I was so grateful that the time change happened that week as well or we would have had a really hard time getting up for school!!!